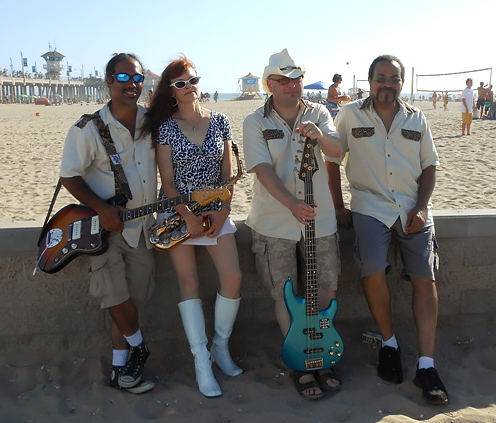 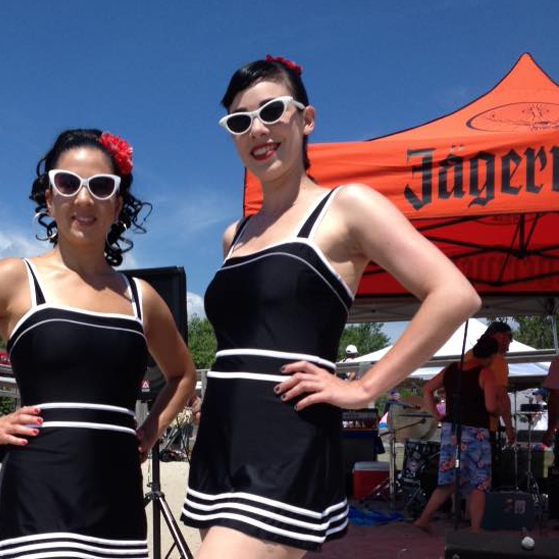 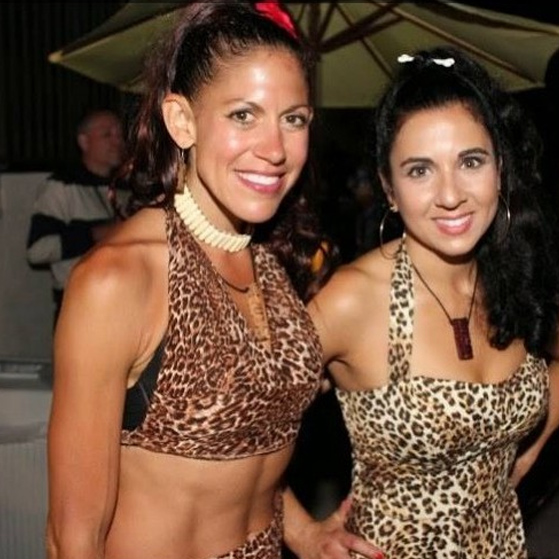 The ground swells of the 9th Wave were first witnessed in the mid 1990s when guitarist Mike Rosado began writing surf music in the Connecticut wilderness, miles from the nearest ocean. By the summer of 1997, the 9th Wave lineup included Mike Lewis on bass and Jim Nichols on drums. The trio recorded the band’s debut album, Cruising for Mako, in 1998 and soon began to attract critical acclaim as Connecticut’s premier surf instrumental combo, opening up for such musical luminaries as Dick Dale and the Amazing Crowns.

In 1999 Rosado and Nichols teamed up with bass player Denise Dixson to release 9th Wave’s second CD, Surf Denial, and enlarge the band’s touring radius throughout Southern New England and eventually down South. After a summer appearance in North Carolina at Sleazefest, Chapel Hill’s preeminent Mardi Gras of music, moonshine and mayhem, the band added Go-go dancers to an already elaborate stage presentation, which has been known to include palm trees, surf boards, flamingos, tiki torches and fog-shrouded Polynesian masks.

The new millennium saw 9th Wave featured on three CD compilations in addition to being highlighted in numerous publications throughout the world. In the midst of a busy performance schedule, including two appearances at Sleazefest 2000, the band produced a third CD, Hurricane, the much-anticipated follow up to Surf Denial. Pursuing the diverse musical trajectory begun on the last album, the CD ventured through several styles of instrumental music including surf, spy, lounge, hot rod, sci-fi, exotica and western twang.

With another two years of Sleazefest performances, inclusion on two additional European compilation CDs, and over 50 gigs in the past calendar year, 9th Wave returned to the studio for the May 2003 release of Time Tunnel, 9th Wave’s fourth full-length all-original CD, published by Beach House Records. This CD takes you on a journey to the days when hot rods ruled the streets and the surf instrumental movement provided the soundtrack. Time Tunnel ventures through several different styles of all-original instrumental surf, hot rod, spy, exotica, sci-fi, and western twang. All tunes were recorded live in the studio with one or two takes, to capture the excitement of a live performance. 9th Wave, the premier hot rod surf band, inflicted the fury of pounding surf on the east coast and beyond in support of this CD, including shows with Dick Dale and Laika & the Cosmonauts from Finland.

May 2006 saw the recording of the 5th CD, Creepsters from the Deep, released in 2007. The eclectic nature of Rosado’s music writing continues with sci-fi, spy, creepy, jazzy, and hot rod surf tunes like “Zombies Attack”, “Black Widow Spy-der”, “TIdal Wave”, and “Full Throttle”. Then in November 2010, Victory at Sunset, the band’s 6th CD, was born. Released in 2011, the CD confirms the band’s commitment to modern surf music with such tracks as “Tsunami Escape Route”, “Liquid Summer”, and the title track. Exotic and eclectic tunes are represented by “Conquistador de las Olas”, “Island of the Lost Tiki”, “Desert Caravan”, and the rousing “Clown Away”. Other diverse tunes represent the genres of hot rod surf, spaghetti western, sci fi, creep, and some re-visited favorites. 2012 found 9th Wave performing for the third consecutive year at the Instro Summit in Chapel Hill NC, as well as touring Las Vegas & southern California including a performance at the prestigious Surf Guitar 101 Convention.

Most bands go through some line-up changes over the years. 9th Wave’s leader, Mike “Staccato” Rosado, has always been the lead guitarist. Other band members have included:

Booking question? Praise? Critique? We'd love to hear from you! Fill out the form or email us at mike@9thwavesurf.com. Also, be sure to follow us on Facebook!